Since most of the world commutes one or another, either to work, family, or holiday, I thought it would be an interesting to share images of that endeavour. Here Matteo, Steve, Peter and Keith share images of their commutes.

The commuters’ dimension, wherever they are and wherever they are directed, is so close to Marc Augé’s non-places. The commuter, in my photographic vision, becomes a sort of ghostly island surrounded by a sea of indifference. He’s protected by an invisible and anonymous armor; he doesn’t care about the world all around him; she goes by the places and people she encounters during her daily travel. Sometimes the commuters appear intangible; other times it seems they could come straight out of an advertisement poster, like flesh and blood survivors. In this way, commuters in turn become a series of non-places.

So commuters, or commuting… Well personally I drive into work at 4.30am every morning so I hardly see anybody on my commute! But not to be deterred I actually got a bus one day, a strange but rewarding experience.
As ever with my pictures I tend to focus on the isolation of people, emotionally and mentally rather than physically. I don’t often find myself shooting people engaging with each other…I prefer the feeling of people engaged within their own minds for some reason. I think it’s a reflection of myself.

I did find that the bus was a great place to illustrate this however, we shared the same space, we sat next to each other with only inches separating us, but we never talked, we awkwardly avoided contact. We kept our thoughts private and our daydreams secrets. Just the way I like it! 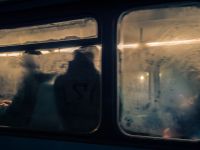 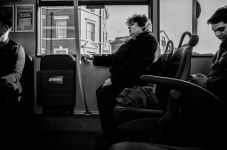 These images are from an ongoing series, “Across the Aisle”. I’ve been working on this series on and off for quite a few years. Images of commuting, especially in New York, have a wonderful history. From Walker Evans, Stanley Kubrik, Bruce Davidson, to many others working contemporary.

For me, the subway becomes a private space once one enters. We shield ourselves from closeness with strangers, as we enter a private space within ourselves. I try to wait until that moment happens. I never ride the subway to just photograph. These images are taken as I commute to and from work, appointments, etc.. I never hide my intention. People look as if they notice, but many don’t see me as I am occupying that same internal space that they just entered. 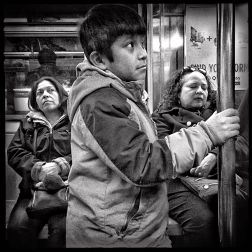 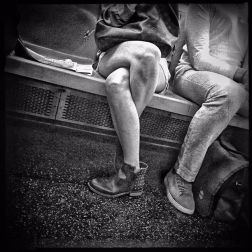 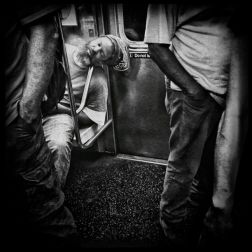 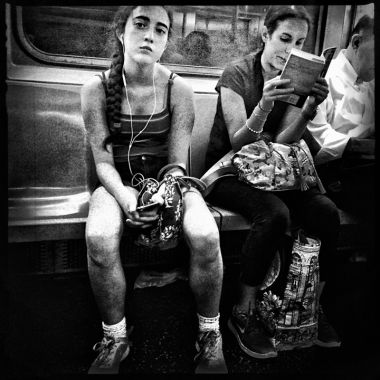