This short  “summer series” – seven shots taken in Agios Prokopios, Naxos Island, Cyclades, during a period of 1 hour with a 50 mm lens – helped me explore the lines/feel of continuity between land and sea.

I was probably looking for a personal sense of space where the horizon shapes a continuity across the shots. I was looking for a sense of surprise too – catching the amazing moment when the eyes alight on the water over the dunes. There definitely is a feeling of relief and amusement in each image to the extent that the horizon is “broken” or “interrupted” by humans: their familiar presence dares to leave the beach and embrace the water unconditionally. 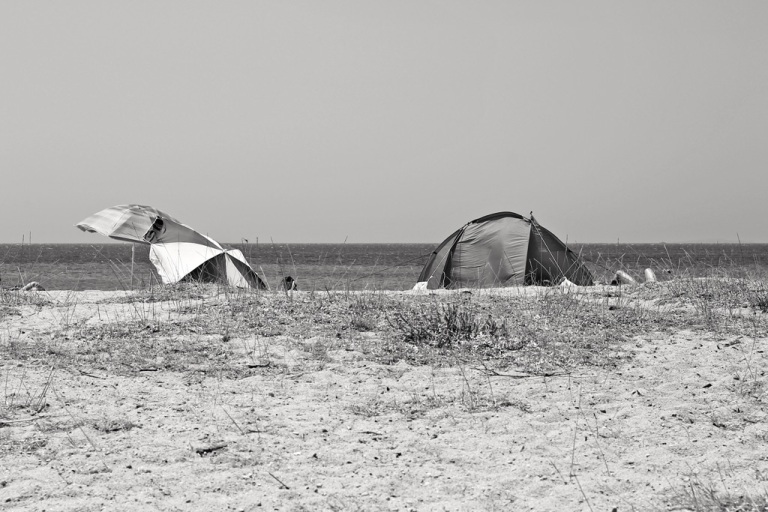 MATTEO CESCHI Milanese street photographer, essayist and freelance journalist, he writes and shoots for several magazines and has exhibited his shots in various locations. He collaborates with Swiss newspaper "La Regione". He is an author and radio host at RT Radio Terapia and collaborates with Radio Rock FM. His latest book, "Note per salvare il Pianeta", was published in 2020 by VoloLibero Edizioni. He is a member of f50/The International Photography Collective. His latest projects were in collaboration with f/50 fellows John Meehan, Steve Coleman and Keith Goldstein and with the Italian fashion brand Lucio Costa. He received an honorable mention at the 2015 International Photography Awards. In 2016 he realized with colleague Jim Marshall "KO.existence", a photographic project exhibited in Sarajevo and in 2017 in Milan (with high-patronage of the Italian Embassy in Bosnia and Herzegovina). In 2017 he was curator of an exhibition of historic photos entitled "Unseen Sixties" at ExpoWall gallery in Milan. In Spring 2017 he launched with creative designer Federico Ramponi remoteclicking, a new shooting language that exploits mobile technology. He was the author of the "making of" of artist and director Federico Garibaldi's short film, "Un filo tra cielo, terra e acqua", winner of the Silver Dolphin prize at the 2018 Cannes Corporate Media & TV Awards. In September 2019 he presented with colleague Jim Marshall "Rise and Fall", a multimedia exhibition produced by the Italian Embassy in Bosnia and Herzegovina and EU Info Centre in BiH at the History Museum of Bosnia Herzegovina, Sarajevo. At the end of 2019 he started a collaboration with Paula Nora Seegy’s Artespressione Gallery in Milan. From February 2020 to early May 2020 he realized his "Winter Midsummer Project" (curated by Matteo Pacini), a completely subjective photographic narrative project rich in details captured during the few occasions one was allowed to go outside during the pandemic. In September 2020, he presented "Out of the Night", an exhibition (curated by Matteo Pacini) dedicated to the contemporary Swiss jazz music scene curated by Matteo Pacini. In late September 2021 "Out of the Night" opened at the Galleria la Loggia in Carona, Switzerland. View all posts by ceschi74

2 Replies to “Land-Sea: Shapes of Continuity”