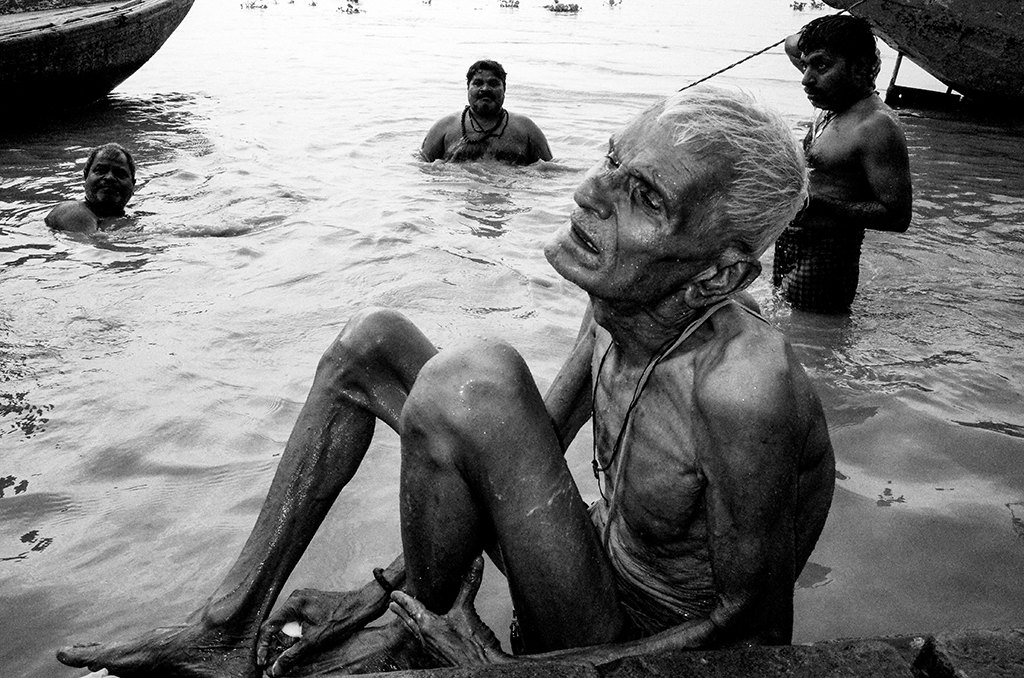 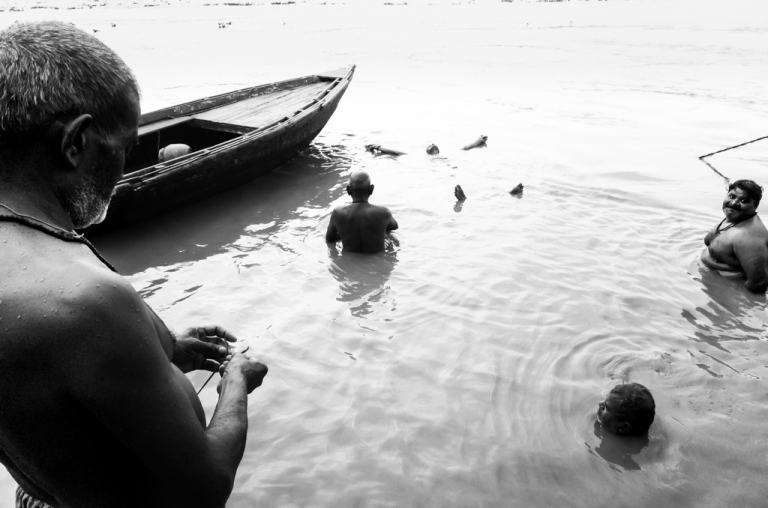 In July 2016, Mahesh Balasubramanian and I (John Meehan) were both travelling to India’s spiritual capital Varanasi.  Plans were set to finally meet and spend time shooting together. Unfortunately, schedules didn’t ultimately coincide due to other professional commitments.

Nevertheless, we were there within a week of each other and I benefited greatly from guidance, location maps and etiquette advice Mahesh provided via WhatsApp. Mahesh had previously photographed the ghats – see background below – at Varanasi in 2013.

Since we were photographing the same locations, at nearly the same time, we thought it may prove interesting to share some of our images in a joint post.

Mahesh says of his experience photographing the ghats “I shot there in 2013 but did not go very close to the subjects because I wanted more activities in a single frame and also used lines/patterns to compose. I was shooting with a big DSLR at the time.”

“This time (2016), I wanted to go closer to the subjects and do more close wider shots with better layering for composition and multiple elements in a frame. I think my small camera also helped me a lot (Ricoh GR).”

I was also struck by the shapes, lines and perspectives offered by the steep ghats on this first visit. However, it was the quiet communion with “Ma Ganga” (mother Ganges) that was most striking and drew my attention in these images. It was one of many examples of a palpable connection to the spiritual in everyday life that I witnessed traveling in India.

We’ll leave you to decide if there are any differences between a native Indian and visiting English photographer’s efforts to document this iconic place.

Some background on Varanasi as a location for photography:

Founded around 2000 BC, Varanasi (or Banaras to give it its historical name) is famed for its many Ghats – stone steps descending into the Ganges – and as the preferred cremation site of Hindu’s. The majority of the 87 Ghats were built after 1700 AD. They range from narrow intimate spaces, likeTulsi Ghat, to huge capacious public spaces, such as Assi and Bachraj Ghat.

The two Ghats used for cremation purposes are the Manikarnika Ghat and the Harishchandra Ghat. In these latter two, photography of the actual cremation process is not allowed.

Many other Ghats offer an intense experience of community activities ranging from morning prayers and exercise sessions to daily performances of ‘aarti’ – a ceremonial dance with fire performed as part of a prayer ritual to honour one or more deities (puja). Here photography is permitted though tact is required as many people are in various states of undress as they bathe in the river.