I want to share some images from a project I worked on intermittently through 2015. I don’t make any claims for the images beyond the fact they testify to a fascination with a city that many photographers may well understand.

Like most urban photographers I have a regular ‘beat’. In my case, Liverpool city centre. The centre is compact; it measures just over one square mile. In this small space we have historic docklands, a UN World Heritage site waterfront, gleaming consumer playgrounds, two universities, the famed Cavern Quarter, a Chinatown, the Walker Art Gallery and six theatres.

In short, a teeming wonderland for all forms of urban photography. Many cities offer such opportunities (of course), but perhaps not so many in so small a space.

If you photograph the same place regularly you’ll know that many things, beside the geography, become familiar. The same older citizens who smoke on the same benches in their favourite square each day, the same Big Issue sellers and buskers on their patches, the little pubs favoured by the older gents, and just where the light arrives at particular times.

In addition, there are the recurring rituals. Office workers puffing on cigarettes in cold doorways, shoppers waiting for friends outside their favourite stores, the older folks laden with bags camped on benches taking a break and, of course, the tourists twisting their maps this way and that in search of the must see landmarks.

Obviously, there is no shortage of possible photographic projects in a busy city centre. In 2015, photographing a particular set of steps became a project for me. It started out casually enough as I sat in the window of the first floor cafe in the John Lewis store. The cafe overlooked* the steps shown in these photos (explaining the elevated viewpoint in some images).

Over the course of 2015 I photographed the steps on and off in all kinds of light. One thing struck me again and again; It was the amount of space between the people sitting on the steps. Whether those people were just seeking a little respite from the busy environments they had temporarily escaped or, perhaps, a deeper cultural explanation to do with a supposed English reserve I don’t know.  An existential need for solitude or, an unrealised desire for the company of others?

Of course, it is tempting to project narratives onto images. Was the blond girl telling the attentive guy not to bother by turning her back to him? Did the guy with the suit and shades really have the kind of background his image suggested (and made me think twice about taking the shot). Was the black youth really keeping a wary eye on his white counterpart?

Who know (or cares)? As Joel Meyerowitz commented about his own speculations regarding his New York images: “None of it means anything, but it happened, and maybe that’s enough.” 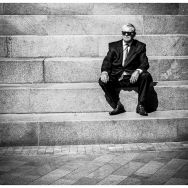 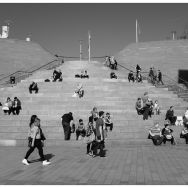 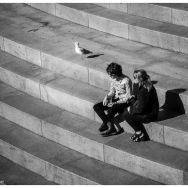 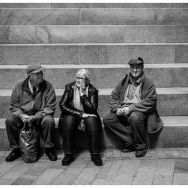 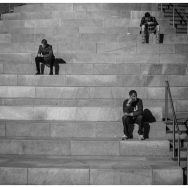 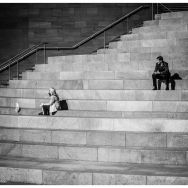 * A recent redesign turned one of the busiest cafe’s in town into a black bat cave with most of the open glass wall covered. What were you thinking JL?

5 Replies to “The Steps – Liverpool (UK) by John Meehan”