The BEST festival of photography you’ve never heard of! And that’s hardly surprising considering that Barro is a small village in the Poitou-Charente region of France.

We go at least once a year to stay with my partner’s brother-in-law and his wife; they live only 20 minutes from Barro. One of their neighbours knew I was interested in photography and mentioned the festival would be on during our September 2013 visit. A little research uncovered dates and opening times and I decided I’d go for a look. I really wasn’t expecting very much; perhaps a few pictures in the local town hall or school. How wrong can one be?

The opening day was warm and sunny. I parked the car and strolled over where I discovered the extent of the Festival. Just about every free space in the village was hung with images; hedges, fences, walls, in cowsheds, courtyards of houses, in the church, the village hall and in the River Charente, which runs through the village. The river images were mounted on wire fences supported by concrete blocks. There were displays by 44 different photographers totalling perhaps 1,000 images.

The village square had settees and chairs situated under the trees where visitors could either sit and enjoy a beer or two, or coffee or soft drink; they could talk photography with any of the 44 photographers who were present for the nine-day duration of the festival. The main supporter of the event, Leica, no less, had a table showing their wares. Another major supporter was Permajet, the photographic paper people. It would appear that the photographers submit their work electronically and is then printed out via the generosity of Permajet.

I went on three separate occasions taking a friend of ours on one and our hosts for the week on the last Saturday of the exhibition. Every time I went I found something new to look at or an image I’d missed.

Sadly, I missed this years festival by a week, which I was disappointed about because the guest of honour was Magnum snapper, Jean Gaumy, and I would have dearly liked to see his work. But there will be the opportunity for other visits, I’m sure.

The festival runs for nine days usually starting on the third weekend of September. You can learn more about the festival at their web site, which, sadly, is in French but you will get the gist of it:

Here’s a few of the images I took during my first visit. All were captured using my Fujifilm X-10. 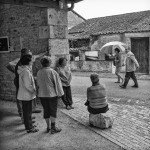 If you are ever in the Charente region in September do go and visit the Barro festival – you will not be disappointed! Nearest airport is Limoges served from Liverpool by Ryanair.

Serious amateur photographer with almost 50 years photography experience based in south Cheshire in the UK. Currently using Fujifilm X-Pro2, X-T1 & X-Pro1. My main interests are landscape, architecture and travel. I prefer black & white images, preferably those in a square format, but colour images in a 7x5 format are also very acceptable. View all posts by thefujifreak

2 Replies to “BARRO FESTIVAL OF PHOTOGRAPHY BY TONY HARRATT”